Dr. Rosanna Gatens, Ph.D. (Rose) is the Director of the Center for Holocaust and Human Rights Education, in the College of Education at Florida Atlantic University, Boca, a position she has held since 2003. Rose Gatens is a passionate and committed educator and force for improving the awareness, tolerance and understanding among people.

Rose has been an educator immersed in the subject of history for many years. She received her doctorate from University of Pittsburgh in Modern European Social and Intellectual History. Her background in history has given her a broad perspective from which to observe the current state of affairs and the need for transformation toward more enlightened and human treatment of all people. The value of such a viewpoint is vital. As the famed philosopher and writer George Santayana wrote, “Those who cannot remember the past are condemned to repeat it.”

It was my pleasure to interview Rose. The subject of the Holocaust and Human Rights touches close to home with the interviewer; my mother was a survivor of the camps of the Holocaust. My grandfather, for whom I am named, did not survive the Nazi horrors. 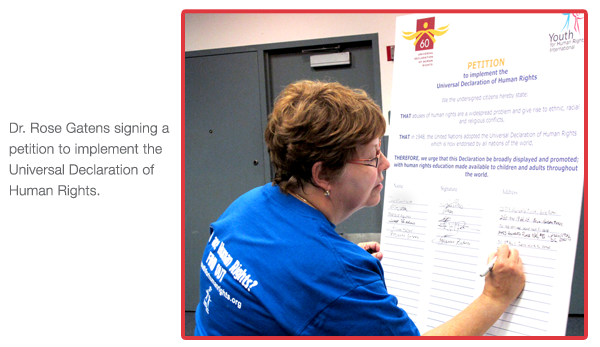 The essence of Dr. Gatens' observations, comments and replies follow:

LM : What is the broad importance of the Universal Declaration of Human Rights?

RG : The UDHR was conceived in 1948, with the idea (to) articulate rights as human beings - not as citizens; not as civil liberties but even more broadly, as this document establishes rights for all. The concept of human rights has particular impact for those without protection of governments that are obligated to uphold civil rights or liberties of citizens.

The UDHR is a critically clear articulation of what human beings have as rights regardless of where they live. The UDHR is a guideline for all of humanity wherever in the world one may be.

Even more, it addresses the ethical and moral elements of respect between and among peoples. Respect fosters human dignity. Dehumanization is first step to lead to genocide, so it is important to live peacefully and co-exist.

It is truly the case that most people don’t understand that they have rights at all. Through education we learn how to practice a way of life for self and others that enables the achievement of peaceful and respectful coexistence. Advocacy is needed to reach understanding in this area.

LM : What motivates you to enlighten/educate others about human rights?

RG : As a high school student, I was taught by nuns in New York, who were active in civil rights and the Vietnam War, and Jim Crow [laws that mandated segregation of races in the South of the USA] and I thought about human dignity without all the privileges that whites [white people] had. As a consequence, when I was in graduate school I participated in a number of human rights initiatives from protesting the use of nuclear weapons to advocating the dismantling of Apartheid in South Africa. What I learned about upholding human dignity carried over to the work place where I advocated for the rights of people with whom I worked.

In educating youth, I realized when students got to my history class, they had a perspective, mostly of the local to national arenas, and not a more wide and worldly view. I realized we needed to reach students earlier. We need to work with students and other educators to encourage world citizenship, to promote human dignity and avoid genocide. I have seen what can be done and what results could be achieved.

LM : How does educating our youth about human rights benefit their lives and the communities they live in?

RG : Education raises awareness of students on many levels. Students are better able to grasp their position as members of a larger community and what it means to be human, the rights as human. I’ve seen this happen many times over the past eight or nine years, when teachers implement the Florida education mandate for Holocaust and Human Rights in their communities students become active in social issues and broader national issues such as the movement to end genocide in Darfur. This is part of creating advocacy for Human Rights.

LM : What results have you observed in those you have presented human rights education to?

RG : The primary mission I have is working with teachers. I have seen tremendous change in teachers caring about this subject. They become energized in teaching students. That, then transfers into the culture in schools, and in the community and among colleagues.

Truly, some become amazing voices in their schools. They are making a difference in their schools including teaching students to engage in philanthropy to support victims of natural disaster, and women who need support and aid here in our area.

LM : What accomplishments in the human rights area are you most proud of?

On a professional level, building the Center for Holocaust Research and Human Rights into a tremendous resource has been very rewarding, even without State funding for our Center and its mission. I see how work with teachers and educators has affected them and their students in such positive ways.

LM : What steps or actions can others in leadership positions take to forward the understanding and use of human rights doctrine and The Universal Declaration of Human Rights?

RG : For one thing, leaders can continuing to carry on the legacy of the Civil Rights Movement here in the US especially its practice of non-violent direct action to achieve change. I participated in the Movement many years ago, and continue to do so now.

Another point is the strengthening of public and legislative awareness of the Holocaust and of genocide. This awareness is essential to mobilize citizens to join the Save Darfur Movement, for example, especially where the principle of national sovereignty inhibits the intervention of the United Nations.

Leaders in every level of society – parents, teachers, and civil leaders – all need to talk openly about human rights, to live consistently with the UDHR and stay aware of the plight of minorities.

I believe we should hold all leaders accountable especially elected officials, to see that they uphold conditions that foster human dignity, especially through support of minorities, the poor, less fortunate and marginalized.

LM : What are your plans for the future with regard to human rights enlightenment and education?

RG : As an educator and activist, I want to make study of the UDHR as important as that of the Bill of Rights and civil liberties generally. Such knowledge can help bring justice and hence peace to peoples throughout the world.

Further, I want to actively foster and nurture interfaith dialogue, in order build trust among Jews, Christians and Muslims.

Beyond that, I will continue to participate in the struggle against human rights abuses and do my part to eradicate it where I live and work.

There is no doubt that Dr. Rose Gatens will continue to leave her mark in the area of Human Rights and Holocaust Education. She is an extraordinary advocate, educator and leader for greater understanding among people.

The Universal Declaration of Human Rights

Become a Member.
Make a Friend.